Managing projects through tough times means using all of your decision making styles.

Have you noticed how sometimes things happen so fast you don’t even realize what happened until much later? This sensation took place for me recently and it turned out to be a lesson in decision making.

It was a peculiar day. The dogs were acting weird and whining. They finally settled into some hidden nook. I was at my desk, possibly even attempting to write this blog post, when I heard military helicopters. They fly practice missions nearby and sometimes I swear they are mere feet above my house. Everything rattles and the noise is deafening. Something was strangely off about this fly over. These helicopters appeared from nowhere. Their roar just arrived, I didn’t hear them coming, and then I noticed I didn’t hear them going either. Maybe they decided today was the day to actually land on my roof. I knew something was wrong and started to run possibilities. Helicopter? Truck? Explosion?

Earthquake! A big one.

On the east coast we occasionally get minor quakes. I have felt larger tremors in California, but this was beyond my experience. Things were rattling off the shelves and desk. When I looked out the window it seemed everything was moving. I got up and started towards the other side of the house, to find my dogs. They were tearing ass towards me, tails tucked and definitely unnerved. I collected them and thought about getting their leashes to keep hold of them. Then I decided there was no time and looked for a door frame to ride it out. 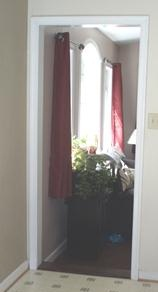 The shaking went on so long I started to think maybe I need to get downstairs. Maybe it wasn’t an earthquake – cause wasn’t stopping! The survival part of my brain was already in charge and it basically said “Hell no. We are staying put until we need to move. It’s relatively safe here.”

Later, hearing stories of ‘what did you do when it hit’ people described standing frozen, holding on for dear life, watching the cubes sway, running for the exits and one dashing off to get a tee shirt (gotta look good). Lots of reactions. Lots of decisions. To me those thirty seconds of shaking are a microcosm for projects. We can sense danger to our personal safety and we can sense when our projects are in peril. In both cases, suddenly there are a lot of choices to be made and a lot of different decision making styles emerging.

Scott and I talk about decision making style – a lot! Because we have completely opposite styles and it can cause, let’s say, turmoil. His is more factual and mine is more intuitive. We work at recognizing these differences, adapting our own styles and occasionally adopting a different style. It takes effort, serious effort, but it pays off. Turns out, it had some unexpected benefits too.

In retrospect I see that, in crisis mode, I used just as much factual decision making as intuition. I carefully weighed the possibilities of what could be causing that rumble, I thought through the best place to be in an earthquake, and I ran a pro and con list of moving from my safe spot. Almost at the same time, I was instinctively moving to get away from falling stuff, looking to collect my animals and assigning a timeframe to how long it would continue.

Likewise, as projects start to go off the rails, teams start to instinctively pick up on it. “That meeting is going to come back and bite us” or “we better pull some info together because we are going to need to justify this delay”. Either way, decisions are being made and when you can combine and leverage many styles you get a much broader base to work from. If you can harness all that decision making mojo, it results in very comprehensive verdicts.

The thing to keep in mind, especially as you establish your strategic direction and implementation plans, is that we all have a preferred method of making decisions but we also all use more than one style when we need to. The more we practice and embrace those different styles the easier it is to put them all to work during crunch time.

How do react in crisis mode?  Something you can reflect on at www.MeetMaple.com.